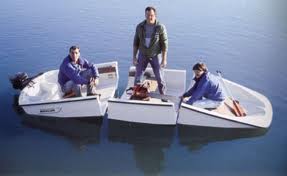 Most people are familiar with the commercials showing a Boston Whaler being cut into sections and remaining afloat.  Being unsinkable is only one aspect of this amazing boat and company.  Our Boston Whaler site covers a wide variety of subjects pertaining to the boats history, specifications, the construction, restoration projects and general articles on the different model boats.  New articles will be added over time.

The original 13 foot Boston Whaler Classic was designed by Dick Fisher who also started the company.  The first boat was manufactured in 1958.  Strangely enough, Mr. Fisher had originally set out to create a small sailboat similar to the popular Sunfish.  What he created instead has come to be the most popular small skiff in America.  The boat is created by making two fiberglass shells, bringing those two shells together while still in the mold and then while under pressure filling the  void between the two shells with foam.  This process creates a very sturdy but lightweight boat that is literally unsinkable.  In a world ruled by wooden hulls this was a big deal !

A World of Information